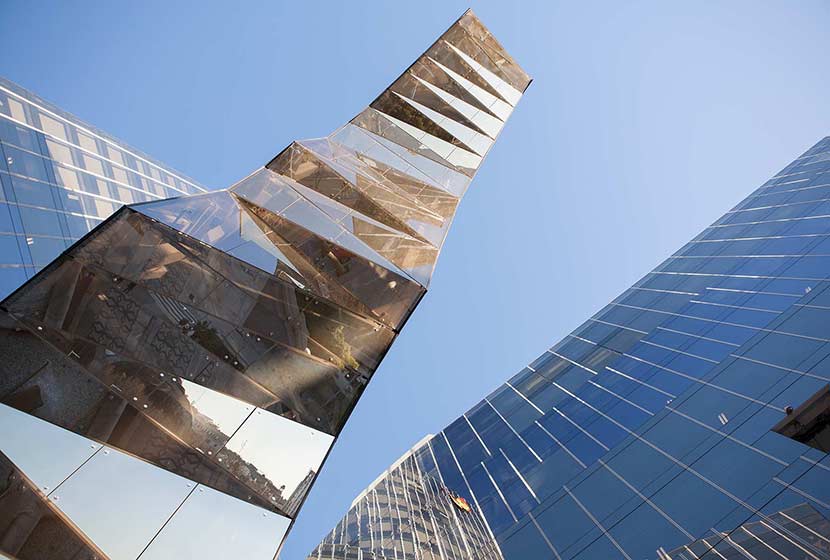 Probably we all agree that Barcelona is a city with an immense cultural life. If we walk through its streets we can discover architectural examples as valuable as the Roman ruins and vestiges of the time when it was known as Barcino, the churches and Gothic civil palaces, without forgetting the worldwide known Modernisme, a movement that seems indissociable from the name of Barcelona. All those buildings, each with its particular style and esthetic, serve as a source of inspiration for stand builders. However, this time we would like to highlight the architectural wealth of Barcelona from a contemporary point of view.

All the historical references of the city have been used as inspiration for the creation of latest architectures, both permanent and ephemeral as exhibition stand design and build, but perhaps the contemporary one has been more discreet for visitors and tourists who take miles of pictures towards the curvy shapes of Gaudi’s buildings or the spiers and towers that culminate the Catalan cathedrals.

Our goal as stand builders this time will be to highlight some of the most well-known contemporary buildings – or maybe not so much – of Barcelona, ​​to underline their relevance also in the field of exhibition stand design.

Barcelona  is a city that keeps growing constantly, always looking towards the future. In fact, it has been recently designated the European capital of innovation, which is reflectet on its urban planning and architecture, but also on its exhibitions if we think on terms of stand builders work, with the exhibition stand design and build using innovative and creative solutions.

From the 20th century, we can find in Barcelona an important presence of several recognized international architects who contribute with their creations to draw the urban skyline of the city. As stand builders, if we take as a great historical reference the Universal Exhibition of 1888 and from there also the International one that took place in 1929, we can see the great influence that these two moments had in the artistic evolution of Barcelona, as well as on the exhibition stand design and build from now a days.

On the other hand, we will all agree that the great recent referent that we all keep in mind is still the celebration of the 1992 Olympic Games, which involved some of the most famous architects of that moment. The importance that this social celebration had, not only for stand builders but for the whole exhibition and trade fairs sector, is undeniable.

If you keep reading this post you’ll be able to discover some of the contemporary buildings that one can’t miss by visiting Barcelona. Keep on reading!

We would like to starte with one of the great milestones of the rationalism of our city. The Barcelona pavilion, made by the german architect Mies van der Rohe, was built in 1929 for the celebration of the International Exhibition, to be dismantled later. Although its marble accumulates more than one hundred years of history, its style remains much more contemporary than many buildings that were built later.

One of the most interesting things about it is that it was dismantled in 1929, once it had fullfilled its function, but back in the 80s a group of Catalan architects reconstructed it in an identical way given its exceptional artistic value. As stand builders we have to thank them because for their effords now we can enjoy today their forms, materials and aesthetic beauty.

What is the relationship between the architecture of museums and the exhibition stand design and build? It can often be closer than we think, since architectural structures, the use of light, the different materials and spatial conception can have many coincidences.

In Barcelona, we can find a great example of the “white cube”, a neutral space that doesn’t show any expression or message, created as a container to show all kind of artworks. It represents the extraction of the architecture of its natural scene to get a better communication between the art and the public, in order to highlight or enhance the narrative and the expression of the artistic piece within the exhibition. In some way, exhibition stand desing and build shares this functional conception of the space, which is created to fulfill its objective and which is born to serve it. In addition, the function in both cases is usually expository, although it can also be extrapolated to the relational or informative field, both in the artistic  field but also for exhibition stand builders.

We imagine that by now everyone knows that we are talking about MACBA (Museu d’Art Contemporani de Barcelona) a building designed by Richard Meier that has become an emblem and symbol of the city. Located in the Raval district, in the middle of Ciutat Vella, sorrounded by narrow, dark and chaotic streets, a large square opens up where this white giant stands out. The modern lines stand out, and the white of its walls combined with the transparency of the glass and its colossal dimensions make an impressive view out of it.

The so-called coup de fouet, the sinuous lines and the ondulations are a constant in the urban profile of our city. Perhaps it’s because of its proximity to the sea, perhaps it’s because Barcelona has always been an organic city that looks into to nature, but the truth is that in its buildings we can find clear references to many Gaudinian elements and the wavy lines invade our walls and facades.

One of our favorite examples as stand builders in Barcelona is the Mercat de Santa Caterina, in the Borne neighborhood. The work of the great tandem formed by Enric Miralles and Benedetta Tagliabue shows the first covered market in the city, restored entirely in 2005, as a result that leaves no one indifferent. Wavy and multicolored, it represents in its outside forms the inside content as the striking market stalls with very different shapes, colors and feelings.

In exhibition stand design and build it is also fun to play with shapes and colors, which gives very striking results, capturing the attention of visitors.

If we walk through Passeig de Gracia street, we will find some of the greatest highlights of Modernist architecture. Without any doubt, when passing in front of Casa Milà, Casa Batlló or Casa Ametller we will see hundreds of people gathered to appreciate its beauty. However, the ripples of the facades take shape with structures as unexpected as the building of the Suits Avenue, projected by the Japanese Toyo Ito. It is a very special project, since it transformed an office building into luxury apartments. One of the secrets that hides its structure is that it allows to see without being seen, which is always interesting in the design and assembly of stands.

Another building designed by the same architect would be the famous Torre Fira de l’Hospitalet in Barcelona. As exhibition stand builders we appreciate the space projected by the architect, not only because it was built in one of the largest venues of fairs, congresses and conventions in the city, but also because of its creativity. In this work, the Japanese architect was inspired by the shape of the lotus flowers, and in the tower an avant-garde look. Of course, as exhibition stand builders it is considered an honor to admire the uniqueness of buildings like this great architect.

Probably we aren’t talking about one of the well-known works of our city but as professional stand builders we think that is essential to mention the construction of this bridge made by the renowned architect Santiago Calatrava. This white bridge in Barcelona received the FAD award for architecture in 1987 and is inspired by the curved lines of the human body. It was built to create a path over a railway line, but also to connect the Sant Andreu neighborhood with the city centre, contributing with a modern look to the hood. In Mac Group we have worked in exhibition stand desing and build that presented similar solutions sometimes.

However, Calatrava’s best-known work in Barcelona is probably the Telecommunications Tower of Montjuïc, built for the celebration of the Olympic Games. As pprofessional exhibition stand builders we appreciate the innovation that this kindof structures brought to Barcelona.

Let’s change the landscape and take a look to high buildings like skyscrapers. As stand builders we can highlight the elegance and the stylized forms of the Hotel ME, designed by Dominique Perrault. It was designed as a large cube and an attached rectangular structure that serves as a counterweight to the great tower, enriching its volumes. In exhibition stand design and build we like a lot these kind of elements that make the building stand out and turn its shapes into something special.

As stand builders we would also like to mention a second creation of Miralles & Tagliabue. We are talking about the Gas Natural building in la Barceloneta. In this case the volumes are presented a little more emphasized, creating a really impressive volumetric effect. In our case, the exhibition stand design sometimes requires this kindof volumetric solutions highlighted to generate atmospheres or unexpected effects on the eyes of the visitor, and although the construction of stands of these characteristics can be more complex, it is visually irresistible.

Finally, we moved away from the metropolitan area of ​​Barcelona to get closer to the town of Sant Just Desvern with the only aim of seeing a project that was born in 1970 and designed by the multidisciplinary Taller de Arquitectura, a working group where science, engineering, psychology, philosophy and architecture. Originally called Space City, it was thought to be originally built in Madrid.

It consists of the construction of a large number of self-managed houses that simulate a small vertical city, with its own streets, floors, houses and even shops and businesses.

As professional exhibiton stand builders we have this project in mind, especially for its adaptation to the physical environment where it is located, for its suburban and industrial characteristics, but also its labyrinth shape, with three blocks around a common courtyard.

We use our own cookies to evaluate the use made of the Web and the general activity of the same.
If you continue browsing, we consider that you accept its use. More information